skip to main | skip to sidebar

Place of Interest & Unique Buildings Around The World 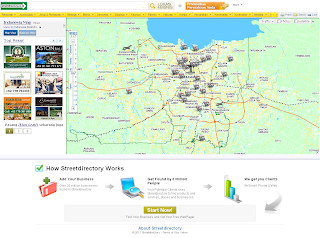 For tourist or local people in Indonesia.. especially in Jakarta, Bali and Batam, the updated and i think the most complete and more nicer map is available with their new interface now. Compare to Google map and others map, Streetdirectory Map more colorful and the city map looks more detail. Can see from level 11-13, the maps shows all the buildings and user also can see some house number.

Since we're all know that the traffic in Jakarta is terrible, traffic jam everywhere... Streetdirectory is now provide traffic cameras around Jakarta, and some cameras for Bali too.

For other feature, they launched a blackberry Jakarta map application about a month ago. And they create another one feature called Webpages which their target are companies/businesses. The advantages of Webpages are usually when people want to create a website, they need to pay domain, hosting, web designer to design their web, programmers to build some features and after all are completed they also need to promote their website. With Webpages, Streetdirectory provide all of them and the price is quite cheap. To see more features and more detail about Webpages, you can visit http://webpages.streetdirectory.co.id/
Posted by Rose at 7:51 AM No comments:

Dancing House! Yeaah! The building with an unusual shape, represents two dancers Fred Astair and Ginger Rogers (usually called “Ginger and Fred”). You can actually see a couple – woman and man dancing together, holding their hands, with a skirt that sways to the music is is an example of a deconstructivist architecture

The Dancing House is the nickname given to a building designed by Croatian-born Czech architect Vlado Milunic in a co-operation with Canadian architect Frank Gehry. Built between 1994-1996, Dancing House is a strikingly modern contrast to Prague’s historic attractions.

Currently, the building is mainly used as office space while the top floor house a French restaurant, La Perle de Prague, and offers views of the Vltava river and Prague Castle.

See the location of Dancing House: Czech
Posted by Rose at 3:39 AM No comments:

Wisma 46 is the tallest building in Indonesia. It is a 262m tall (roof height) skyscraper located in the Kota BNI complex in Central Jakarta, Indonesia. The 48 storey office tower was completed in 1996 under the design by Zeidler Roberts Partnership (Zeidler Partnership Architects) and DP Architects Private Ltd.

Wisma 46 towering height and architectural design concept are unique and set apart from all othet office buildings in Jakarta. It is indeed and ideal distinctive corporate address for Multinational Corporations.
The tower contains 23 elevators which can reach speeds of 360 mpm in the super high speed models.

The tower is a cuboid concrete tower rising 200 m before a sleek glass tower rises out of it before culminating in a curved spire. The glass tower has a totally glass exterior unlike the tower it rises from which has a concrete exterior with square windows. This pattern of square windows is disturbed three times by long rectangular windows. The building's design is described as modern and late-modernist.

The tower has 48 floors above ground which consist of offices only. There are 2 underground floors used for car parking.

See the location of Wisma 46- Kota BNI
Posted by Rose at 5:07 AM No comments:

Beijing Airport Terminal 3 - The Biggest Airport in The World

Those curious to bore a flight from the world’s largest luxury airport can now strengthen their hopes. In February 2008, one such airport is expected to open in Beijing, welcoming the tourists from across the globe to the Summer 2008 Olympic Games. Known as Terminal 3, this height of this single building would beat the combined height of the five of the London’s Heathrow Airport terminals.

Designed within four years, the green aspect of the building absorbs maximum heat from the rising sun due to its south-east skylights whereas the environment-control system reduces the energy utilization and release of carbons. Spread over 245 acres, the building alone cost $2.8 billion, and $4.6 billion is the rough figure of the expenditure made on the required infrastructure. It can lodge around 43 million passengers. 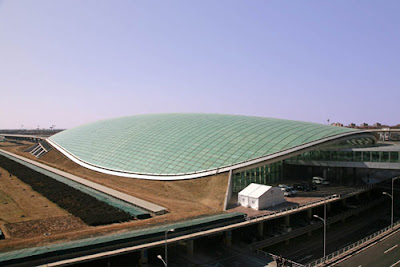 Located on a historically and culturally prominent downtown site, the Walt Disney Concert Hall is to become the permanent home of the Los Angeles Philharmonic. The Concert Hall is situated on historic Bunker Hill at the intersection of First Street and Grand Avenue, adjacent to the existing Music Center of Los Angeles.

The project began as an invited design competition, during which many of the fundamental design tenets were established. These include an open and accessible main entrance, a sympathetic and inclusive attitude in the building's relationship to the Music Center's existing Dorothy Chandler Pavilion, a pedestrian scale frontage along Grand Avenue, a generous and open backstage area, and a large garden.

Source: www.arcspace.com
Posted by Rose at 5:46 AM No comments:

Rose Center for Earth and Space

At the start of the millennium, the American Museum of Natural History opened the Rose Center for Earth and Space. At a cost of US$300 million, the building's spectacular architecture consists of a vast glass facade, behind which hangs a 2000-ton silver globe, housing two film theatres.

The Rose Center uses state of the art technology to reveal the wonders of the Universe through a series of simulations and interactive displays. Visitors are shown a simulation of the creation of the universe and the Big Bang, including a narration by Jodie Foster. A spiralling walkway circling the sphere chronicles the 13-billion year evolution of the universe, with images taken from the Hubble telescope.

The highlight of the exhibition is undoubtedly the Space Show inside the Hayden Planatarium. A 30-minute 3-D tour of the universe, using the world's most powerful virtual reality simulator, takes audiences past Mars, Jupiter and Saturn to witness the birth of stars in another galaxy and come face-to-face with a Black Hole.

Arrive early if you want to buy tickets for a show on the same day, or phone the ticket hotline to buy tickets in advance. A limited number of tickets can also be purchased from the Rose Center Website.

The Rose Center is located in the American Museum of Natural History in Manhattan's Upper West Side, overlooking Central Park. It stages numerous exhibitions throughout the year and lots of fun events.

Source: www.whatsonwhen.com
Posted by Rose at 8:10 AM No comments:

Architecture in China never ceases to amaze us—case in point—the REN Building. Copenhagen’s Bjarke Ingels Group (BIG) proposed this eye-catching design over a year ago to coincide with Shanghai’s “Better City, Better Life” 2010 World Expo . The building takes its form from the Chinese character for person 人 (”ren”) and combines two buildings (one symbolic of mind and the other symbolic of body). We love the poetic inspiration that reflects both site and cultural sensitivity.

The Ren building is a proposal for a hotel, sports and conference center for the World Expo 2010 in Shanghai. The building is conceived as two buildings merging into one. The first building, emerging from the water, is devoted to the activities of the body, and houses the sports and water culture center. The second building emerging from land, is devoted to the spirit and enlightenment, and houses the conference center and meeting facilities. The two buildings meet in a 1000 room hotel, a building for living. The building becomes the chinese sign for “The People”, and a recognizable landmark for the World Expo in China.

Source: www.inhabitat.com
Posted by Rose at 5:55 AM No comments: